My camera is working again! I bought a new LCD screen off of Ebay for $30 plus I had to a buy a soldering iron which I got from Wal-mart for about $5. Things didn't go very smoothly though. After swapping out the screens, which was a bit difficult, I was surprised to find that the backlight wasn't working. I could see the screen if there was light shinning on it, but it emitted no light of its own. I contacted the seller to find out that there are actually 2 versions of the Nikon d50, both of which use the same LCD, but not the same backlight which is inside of the LCD.

His recommendation:
Take the backlight out of my broken LCD screen, and swap it with the incompatible backlight from the new LCD screen.

My recommendation:
Give me a fucking LCD that will actually work with my camera.

Realizing the compromise was probably to send my camera to this seller, where he would likely/hopefully switch the backlights and send it back to me (apparently they do offer this service if you want to pay shipping, and wait for who knows how long, etc...), I decided to give his suggestion a try. If it failed and I broke everything, then I could start complaining again. Lucky for me, and him, it worked! But why stop there?

Having a new soldering iron, a number of broken electronics, and a new found confidence in my electrical competency, I decided the only course of action was to fix everything in sight. This is a device that you can plug other electronics into and it tells you how much power they are using. Very useful, but abruptly stopped working one day. I proceeded to open up the device to have a look around. After a brief moment of thinking what the hell is all this shit, my eyes made contact with a small fuse. Of course! The fuse must have blown, so simple. I checked if electricity would pass threw the fuse using my multi-meter. 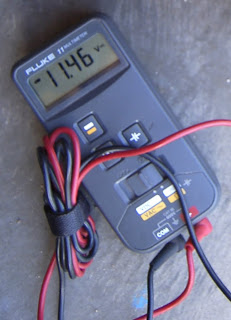 It didn't, which means the fuse is in fact blow. Turns out there are still a few problems though.

1) The fuse is soldered to the board (ie. won't just pop out)
2) I don't have a replacement fuse.
3) I'm in the mood for instant gratification.

Luckily, there is one solution for all these problems. The soldering iron! 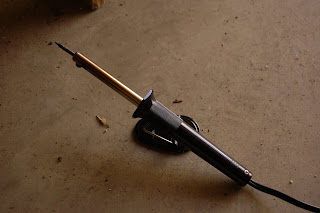 I proceed to un-solder the old fuse, and using more solder, solder a strip of solder where the fuse use to be. Essentially bypassing the fuse with a strip a solder, and Voilà, it worked! Not particularly safe, but it worked. 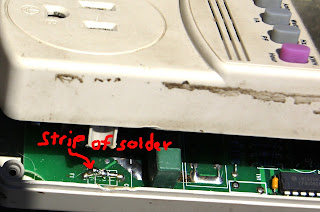 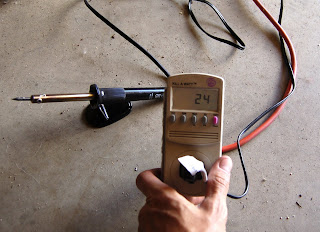 24 Watts. Not too bad. Will run off the car no problem.

Feeling unstoppable, I move on to the next project.

As some may know, I have a solar panel which I use to charge a battery, which in turn can power various small electronics. This winter I attempted to extended the waning life of my battery by running some long recharge cycles that are suppose to help with this. Long story short, I overcharged the battery causing it to vent gas and turn into a paper weight. This type of battery is called a sealed lead acid battery, much like the non-sealed lead acid battery you have in your car. Sealed as in not suppose to vent toxic gas...

Back to the task at hand. I happen to have and old broken laptop my friend Tiffany gave to me. Laptops use lithium-ion batteries, which are superior to lead acid for this kind of application. Soldering iron in hand, I set to work on my replacement battery for my solar setup. I removed the lithium ion batteries from their protective case and attached them to the solar charger and plugged in the panel. Success again! 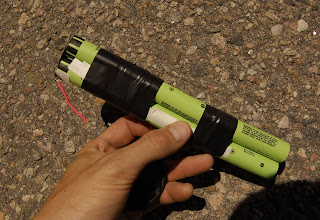 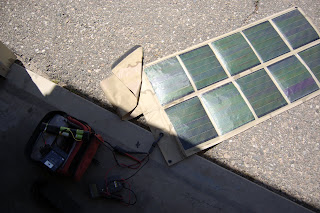 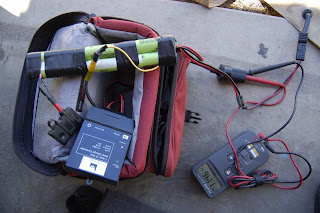 Well, 3 for 3. Camera, Kill-A-Watt meter, and solar setup. Whats next?

Lets not get carried away.
Posted by paulnadler at 1:15 PM